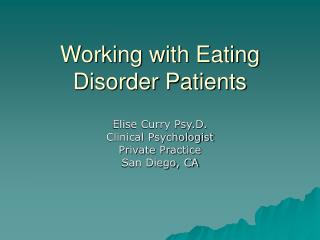 TEN WAYS TO PROMOTE RELATIONSHIPS WITH PATIENTS - . greet patients by name, tell them your name and role in their care

Potential questions on Panic Disorder - . answers based on dsm-iv-tr, apa practice guideline, and other references that

The Thin Edge of the Wedge - . acceptance, change, and behavior therapy in the treatment of addiction. dialectical