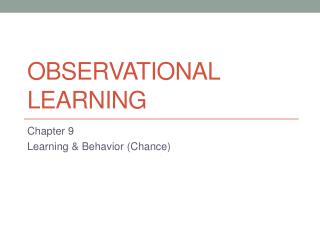 Chapter 6 Learning - . learning. learning is defined as any relatively permanent change in behavior that is based upon

Everything you need to know about Learning Outcomes! - . 21 september 2012 dundalk institute of technology dr declan

What is learning? - . what makes a good comedian?. learning is the hedgehog concept of schools. where does learning

e-Learning: Concepts, Usage and Tools - Martin molhanec abstract what is e-learning? concept of e-learning. usage of

4.2 Social Learning Theory - . albert bandura’s theory. how does society pass down its norms (sets of rules)? we learn