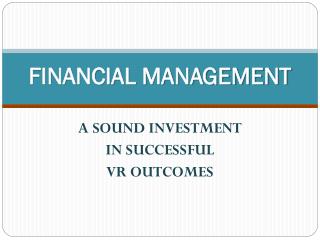 Financial Management - . terms. budget financial plan that outlines and forecasts the revenues and expenditures over a

FINANCIAL MANAGEMENT - . ….self. financing…. defination. firm or project that generates its growth capital from its

Financial management - . a) the concept of money management. money as a resource for reaching goals . money seems to be

FINANCIAL MANAGEMENT - . working capital management. introduction. the “march to cash” in a company consists in: