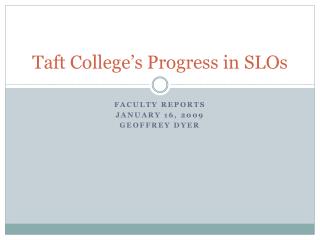 Taft College’s Progress in SLOs. Faculty Reports January 16, 2009 Geoffrey Dyer. Overheard This Week. “I don’t know if you know what you’re talking about, but it makes sense to me.” “Give us release time to do this.” “I still don’t know what SLOs are.” Academic Readiness for College : What Does it Mean? - . lynne miller. january ,2006. what we know about maine kids and

Passport to College - . “an investment in knowledge pays the best interest.” benjamin franklin. what is passport to

Nuts and Bolts of Progress Monitoring - . laura boynton hauerwas kristen matthes may 31, 2006. topics for the morning.