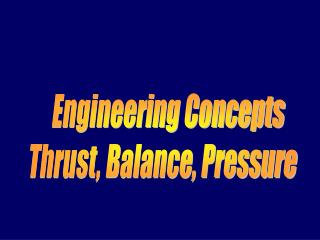 Engineering Concepts Thrust, Balance, Pressure. Transportation Unit 8. As stated in Unit 5, all bodies in motion have four principle forces acting upon them; gravity, thrust, lift and drag . Scientists use a force known as Action-Reaction to move items and people out of earth’s atmosphere.