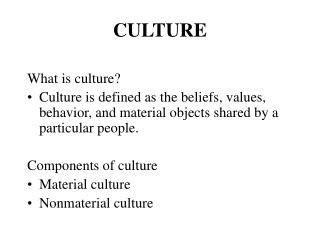 CULTURE. What is culture ? Culture is defined as the beliefs, values, behavior, and material objects shared by a particular people . Components of culture Material culture Nonmaterial culture. Example of non-material culture Here a president gets a Maori greeting.

Culture - . early years lecture 14. this lecture. what do we mean by ‘culture’? how is culture different from

Culture of Oman - . by student : nasser mohsen nasser class: 11e1. i'll start talking about oman culture at all and i

Culture of Libya - . by: tucker douglass. language. arabs became the most wide spread language in libya when the