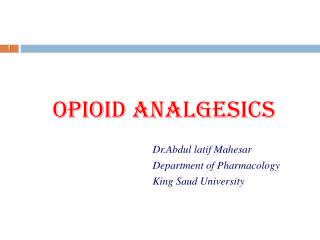 Chapter 7 Analgesics - . analgesics. agents that decrease pain are referred to as analgesics or as analgetics

ANALGESICS - . pain management. what is pain ? a protective mechanism to warn of damage or the presence of disease part

What is Pharmacology? - . derived from the greek word for drug a science that studies drug effects within a living

Pharmacotherapy of Pain: Adjuvant Analgesics - . adjuvant analgesics. defined as drugs with other indications that may be