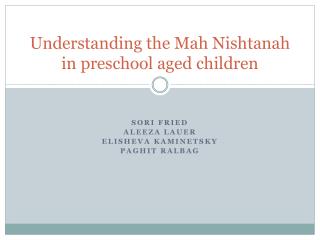 Understanding the Mah Nishtanah in preschool aged children. Sori Fried Aleeza Lauer Elisheva Kaminetsky Paghit Ralbag. Initial Interview. We wanted to understand the knowledge that 5 year old children have about the Mah Nishtanah We explored if they were able to:

The Relationship between Language and Behavior in Preschool Children - . ann p. kaiser, phd. department of special

Serving Preschool Children - Title i , part a, of the elementary and secondary education act of 1965 , as amended by the

What do children learn in preschool? - . let’s take a look……. background. prior to the 20 th century, little