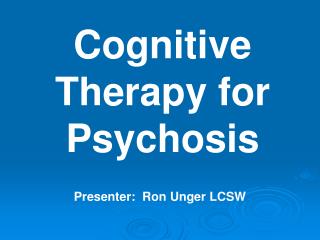 Cognitive Therapy for Psychosis. Presenter: Ron Unger LCSW. The Essential idea of Cognitive-Behavioral Therapy:. If you learn to think and act differently, then your mental and/or emotional problems can disappear

Assumptions of the Cognitive Approach - . cognitive processes influence what is learned. 2. people are selective about