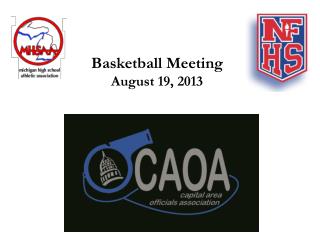 Basketball Meeting August 19, 2013. The Upcoming 2013-2014 Season. How have you prepared for the upcoming season since your last game of the season? Attend a camp Attend a clinic/conference (OMD) Watch a video of yourself Read parts of the rule book Physical conditioning Notices for the Open Meeting August 1 st 2013 - . the speaker for today is maureen taylor and the topic of her talk is:

Daily Announcements - . may 21, 2013. ghs basketball. if you are interested in playing varsity or jv basketball next year

August 2013 LCCU Meeting - . how can we browse the internet more privately and avoid being tracked by ads, or avoid