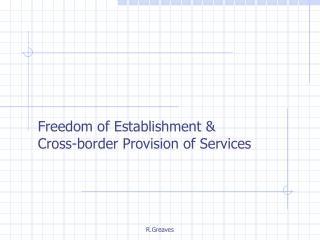 Freedom of Religion – Establishment Clause - . “to keep the wall (that separates church from state) from tumbling

Cross-border provision of services - . art 49 ec treaty within the context of the provisions on establishment. article 49

Cross Border Connectivity - . william stucke william@qpop.co.za. what is the internet?. the i nternet is a network of

CROSS BORDER INNOVATION - . defining and categorizing. dr. iris berdrow. defining innovation. what is your definition of