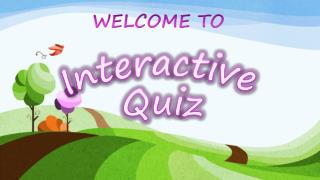 The Tiger who came to Tea Interactive Quiz - . a quiz with action buttons: click on the answer you think is correct. 1.

Sea Ice An Interactive Quiz - . this quiz will test your knowledge about arctic sea ice and sea ice science. read the

Seminar in Interactive Advertising - . department of advertising college of communication the university of texas at

Molecular Gastronomy - . agenda for today. introduction of myself and the plans for the period fill out pre-lesson

Please open Daily Quiz 35. - A scientific calculator may be used on this quiz . you can keep your yellow formula sheets

Becoming More Active for 2012 - Help. becoming more active for 2012. press one of the rings below for more information or

Welcome to the Interactive Survey System - . what is the interactive survey system?. online, interactive version of the

Interactive Notebooks - . janice belcher. e q’s:. h ow do i use interactive notebooks to engage learning in my