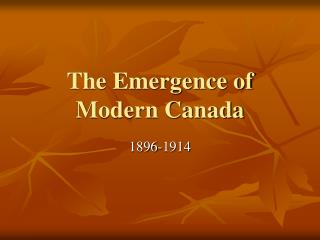 The Emergence of Modern Canada. 1896-1914. Introduction. 1905 Alberta and Saskatchewan join confederation. This made Canada a country that now stretched from sea to sea. Even with Canada’s vast territory it feared takeover from the US. This was both political and economic. The Context for the Emergence of the Profession - Important cultural influences on the emerging sport, fitness, and

Globalization and the BRIC ’ s Emergence – Understanding challenges and opportunities - . the brics. determinants of

Globalization and the BRIC ’ s Emergence – Understanding challenges and opportunities - . the brics. determinants of

Aboriginal Peoples of Canada - . living cultures, vibrant stories. pre conceptions and protocols. as with any part of our

Canada - . made by : vasilchenko alexandr . my favorite country is