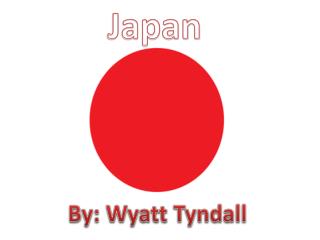 Japan. By: Wyatt Tyndall. Location. Japan consists of several thousands of islands, but Honshu, Hokkaido, Kyushu, and Shikoku are the four largest. Japan’s closest neighbours are Korea, Russia, and China. The sea separates the Asian continent from the Japanese archipelago. .