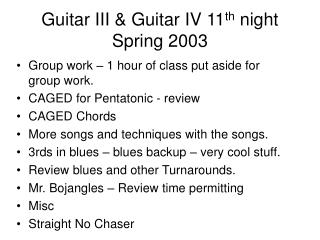 Guitar III and IV 6th night Spring 2004 - . do that’ll be the day from book as a review. for guitar iv work on the

Guitar Setup - . introduction. guitar setup on your new guitar is an iterative process that will take you approximately

Guitar - . starting out your program. buy a guitar!!!. nylon vs. steel strings scale talk to a supplier go cheap, but