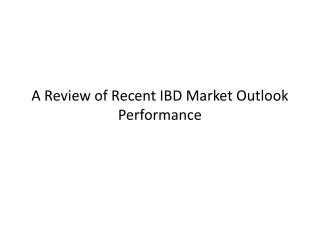 A Review of Recent IBD Market Outlook Performance. Looking at the Performance of IBD’s Market Pulse Current Outlook. At last meeting, Vas noted a discussion about the IBD Outlook started in the SIPSIG group by member Kevin Campbell Introduction to Outlook 98 - . outlook 98 - foundation. what is outlook?. outlook is the computerised equivalent of the

Business Review - . this template is used to assist in the development of the company’s yearly business review. content

ECONOMIC OUTLOOK - . july 2012. economic outlook is revized in the 1st and the 3rd weeks of the month. recent

Review some predictions made 22 years ago, recent findings and implications - Changes in the fisheries of atlantic canada

“The outlook for market pulp supply and demand in a more challenging economic climate” - . september 2008

Performance Review A Time to Build Your Team - . focus 2010. “since our last review, this employee has reached rock