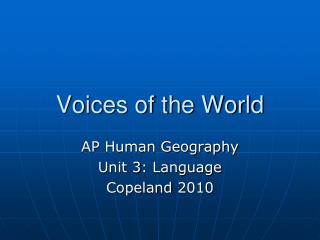 VOICES of the Staff - . an introduction. overview. where it all began the design outcomes and successes what the future

Voices of the Poor - . “ for a poor person everything is terrible- illness, humiliation, shame. we are cripples; we are

Voices of the Hungry - . a worldwide survey of people’s experience with food insecurity. background &amp;

Voices of the Revolution - . “we always had governed ourselves, and we always meant to.” ~farmer at battle of

Voices of The Thunders

The silent voices of Kibera - . conflict transfromation and women at the grassroots. examines the discourse and practice

Voices of Poor - . when one is poor, she has no say in public, she feels inferior. she has no food, so there is famine in

Hearing of Voices - . dr. samuel pfeifer. four aspects of inner voices. 1. inner dialogue („i tell myself“, „as if

Voices of Oppression - . american dream or nightmare. oppression. define in your own words what does this word means to

See the Voices - . creating an environment of empathy. what’s missing in our