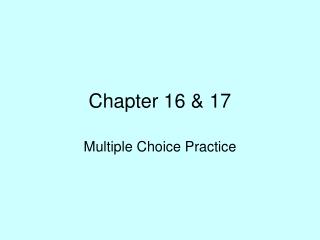 Chapter 16 & 17. Multiple Choice Practice. 1. All of these influenced Europe to expand EXCEPT: (A) fear of the states and peoples Europe might encounter. (B) desire for gold and monetary gain. (C) rivalries with other European states to acquire new lands.