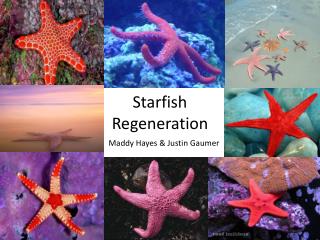 Starfish Regeneration. Maddy Hayes & Justin Gaumer. What Is A Starfish?. A starfish is not a fish. It is a echinoderm, which comes from a Greek word meaning “spiny skin.” There are over 2,000 species of starfish and each varies in size, color, and texture. Starfish - . physical description . starfish are hard-skinned animals which have spines that help to protect them. they

Starfish - . physical description. starfish are hard-skinned animals which have spines that help to protect them. they

Starfish - . by: gina uguccini and ashley novak . table of contents. introduction what they eat where they live

Starfish Newsletter Starfish Class - ‘Stars in the making !’ - . 7 th june 2013. our learning in literacy we have

Starfish Troy University - . what is starfish?. starfish is… a student success company a student retention system

The Starfish Story - . a young man is walking along the ocean and sees a beach on which thousands and thousands of

Regeneration - . history versus fiction. split into two groups you have 5 minutes to prepare your arguments to support