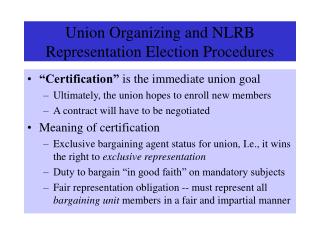 Union Organizing and NLRB Representation Election Procedures. “Certification” is the immediate union goal Ultimately, the union hopes to enroll new members A contract will have to be negotiated Meaning of certification

Union Representation - . a guide to a member’s right to union representation. does this sound familiar?. please see

CHICAGO TEACHERS UNION - . procedures for judge of election election of union officers and of delegates and alternate

15.4 (p50) Essential Question - . eq: in what ways did the election of lincoln lead the southern states to secede from

The Election - . main points from article “the election,” by bobby witherington. introduction . the presidential

Lincoln, Secession and War - . 10.4. objectives. compare the candidates in the election of 1860, and analyze the results.

Get the facts… - . vote week http://www.nlrb.gov/nlrb/shared_files/brochures/election.pdf this is a brochure called

Working Effectively with Labor - . chapter 13. learning objectives. after reading this chapter you should be able to: