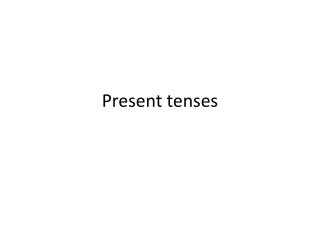 simple present and past tenses - . present tense. go. affirmative. interrogative. short answer. i go you go he, she, it

TENSES - . different forms of the main verbs (verb forms) are combined with different auxiliary verbs to make up the

Simple Present vs. Present Perfect - . improving our control over the present tenses. what’s the difference in Present Tense of –ar Verbs - . to form the present tense of a regular verb that ends in –ar , drop the –ar and add

Present Tenses Tests - . (mack - sp) - choose the correct alternative: the theater is expensive, and i don't have much

Verb Tenses: Simple Present, Past, Future Tense Verbs - Verbs are the engines that power sentences. without a verb, a

present - Future. we use tenses of verbs to refer to actions or situations in the present, in the past and in the future