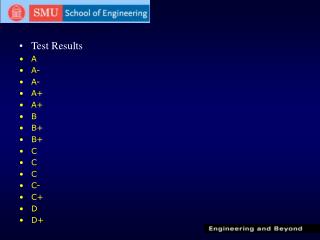 Test Results A A- A- A+ A+ B B+ B+ C C C C- C+ D D+. Address Resolution Protocol ARP. RFC 826. TCP/IP addresses are 32 bits and represent a network, subnet, and host ID. Addresses on LANs are represented by physical (MAC) layer addresses and they are 48 bits in length. Interpreting Test Results - What tests will my child take?. students are assessed through:dibels (dynamic indicators of

Test Name - Results - Your company logo. test name - results. modify all the text in red in this document and delete all

Personality Test Results - . result (1): lewis. what do you know, you're just like lewis! whether you're inventing the

Test Sequence/Results - . as the customer’s request, the precision of ozone profile value is increased with the bufr