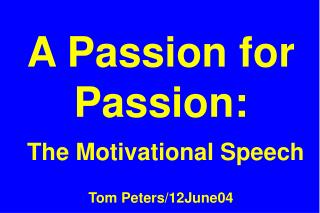 A Passion for Passion: The Motivational Speech Tom Peters/12June04 A Passion for Passion: The Motivational Speech Tom Peters/12June04. Setting the Scene.

A Passion for Passion: The Motivational Speech Tom Peters/12June04

Motivational Trainer In Faridabad - Pep-up and develop belief in yourself and your abilities.set realistic goals for self

MYSTERY and PASSION - . neil greenberg department of ecology and evolutionary biology university of tennessee. we are

SOME MOTIVATIONAL QUOTES - . to feed our creative mind. contact: infos@creativgroup.net. “to leave a creative life, we

Matthew’s passion narrative - . the midterm on tuesday. later parables in matthew. parable of the laborers: 20: 1-16.

Book of Job and the Passion of the Christ - . the meaning of suffering in jewish and christian religions. contrast

“Our mission is to fight poverty with passion and professionalism…” - . last year donor agencies funded $5 billion

A Warm Welcome To our Parents - . all pupils possess talents and will experience success. secondary two ptm 1 feb 2013.