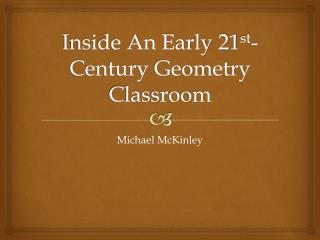 Inside An Early 21 st -Century Geometry Classroom. Michael McKinley. Foreword. This is a collection of artifacts that was found in what was a 21 st -century Wisconsin math classroom. I hope that their discovery provides insight into how a typical math class was operated at that time.

How To Study Math - Slide # 1. how to study math. &quot;the essence of mathematics is not to make simple things

Class of 2013 - . scheduling classes for senior year!. before anything else, preparation is the key to success. alexander

Geometry - . by: emily spoden. trapezoid. i’m a quadrangle that always has one pair of parallel lines. rectangle.

Mid-exam review class - . consumer theory. a typical consumer will satisfy himself as much as possible with limited