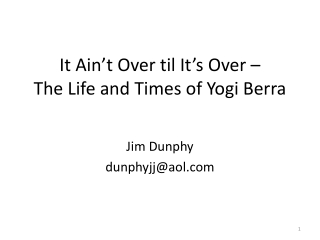 It Ain’t Over til It’s Over – The Life and Times of Yogi Berra. Jim Dunphy dunphyjj@aol.com. Intro. Yogi Berra is remembered today as the author of “yogisms” – but there was a lot more to him than that. Intro. Veteran of DDay Three time MVP of the American League Business Manager Roles and Responsibilities - . presented by:. patty verdouw verdouw – all one word. rhymes with her