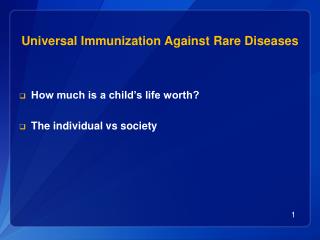 Universal Immunization Against Rare Diseases. How much is a child’s life worth? The individual vs society . Meningococcal Meningitis. The symptoms include sudden onset of fever, headache, and stiff neck. It is often accompanied by other symptoms, such as Nausea Vomiting Rare diseases - Effects not so rare - To most people, the word 'disease' refers to infectious diseases like typhoid,

Immunity Against Diseases - . made by aqsa zia. immune system. this system is made up of some special kind of cells,

Rare Diseases Task Force - Working group on standards in health care. wg1: wg on centres of referencepublication of the

Rare Diseases Working Group - . luzern, 24 september 2010. background. rare diseases one of the most peculiar topics of

Defense Against Infectious Diseases - . 6.3. pathogens · an organism or virus that causes a disease ·viruses, bacteria,

rare Mendelian diseases versus common multi-factorial diseases - E.g., cystic fibrosis is one of the most common

rare Mendelian diseases versus common multi-factorial diseases - E.g., cystic fibrosis is one of the most common

Codification and Classification of Rare Diseases - . activities of the rdtf working group. rdtf objectives. to wide

Anesthesia for Rare Co-existing Diseases - . alexandru apostol, m.d. achondroplasia. the most common cause of