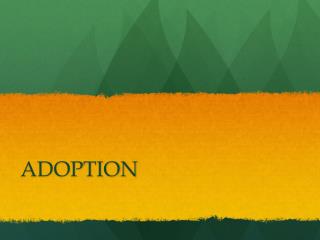 Adoption - . premise . we have a sufficient corpus of specifications and profiles to realize (implement) identified use

Adoption - . and korea. anna hance. adoption. adoption is the creation of a new, permanent relationship between an

ADOPTION - . definition *a severance of the legal r’ship between a child and his natural parents and the

Adoption - . who can adopt?. adults is there an age limit? may singles adopt?. who may be adopted?. minors adults

Adoption - . richard, lachy , somi &amp; leonie. what is it?. legal surrender of parental rights and responsibilities

Adoption Agent!!! ((: - . by harmony moore!! career project!. background!!. when a child is adopted its not only an

Innovation Adoption - . ipad by: lou ann morris. need. student’s need a notebook, this is the notebook of the future.

Gay Adoption - . what do you know about gay