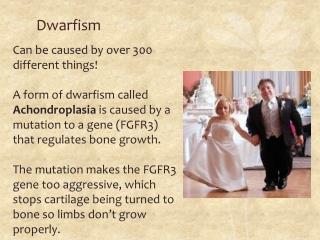 Dwarfism. Can be caused by over 300 different things! A form of dwarfism called Achondroplasia is caused by a mutation to a gene (FGFR3) that regulates bone growth. The mutation makes the FGFR3 gene too aggressive, which stops cartilage being turned to bone so limbs don’t grow properly.

By Garcelle.Herke Period 3 - Achondroplasia (dwarfism). by garcelle.herke period 3. how does a person inherit it?. it

Achondroplasia- Dwarfism - . by: melissa findlay. who is most likely to get

Bioethics - . dwarfism. insert picture(s) here. background info. dwarfism. allow the child to be born with the gene, and

School Accommodations for Students with Dwarfism - . by laura wagonlander university of michigan-flint winter 2009. the

Achondroplasia (Dwarfism) - . by maddie alm and kirk webb. inheritance. achondroplasia is a dominant gene. it is

Pituitary DWARFISM - . by caitlin antoch and robert wood. which gland is involved? . the pituitary gland is a pea- sized

Achondroplasia (Dwarfism) - . general facts:. 1 in 40,000 live births are dwarfs. it is characterized by an abnormality