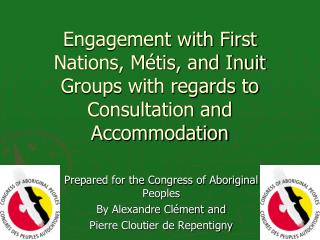 Prepared for the Congress of Aboriginal Peoples By Alexandre Clément and Engagement with First Nations, Métis, and Inuit Groups with regards to Consultation and Accommodation. Prepared for the Congress of Aboriginal Peoples By Alexandre Clément and Pierre Cloutier de Repentigny. Outline of Presentation. Background on the project and methodology Glossary of terms

Prepared for the Congress of Aboriginal Peoples By Alexandre Clément and