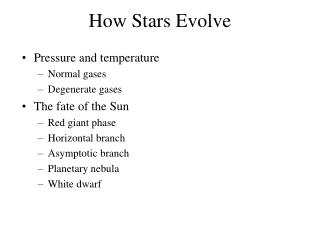 How Populations Evolve - . chapter 13. biology and society: persistent pests. mosquitoes and malaria - in the 1960s, the

How Populations Evolve - . chapter 13 part ii. biogeography – australia is home to many unique plants and animals, such

How Do Stars Form? - . galaxies of stars. the sun. by far the nearest star to earth. a star is a large self-luminous body

Microevolution: How Does a Population Evolve? - . chapter 16. the evolution of evolution. blending inheritance

How Populations Evolve - . charles darwin : theory of evolution by natural selection. evolution – change over time of

Preserve / Evolve / Transform - . what is possible with form-based code?. preserve / evolve / transform. how do you

Populations: How they evolve - What is a population ? all the individuals of a species that live together in one place at

How Stars are Classfied - . star magnitude. at night we can see thousands of stars but during the day we can only see our

How do regulatory networks evolve? - . module = group of genes co-regulated by the same regulatory system. * evolution of

How did prehistoric Indians evolve? - . number your next empty page in your notebook as pg. 5 and write today’s eq at