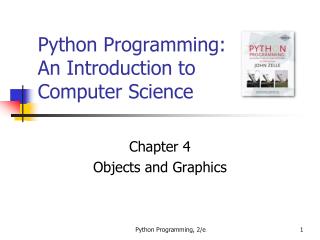 Python Programming: An Introduction to Computer Science. Chapter 4 Objects and Graphics. Objectives. To understand the concept of objects and how they can be used to simplify programs. To be familiar with the various objects available in the graphics library. Programming Basics - . topic 8 - part 1 chapter 3 – part 3. solving problems using the computer as a tool. much like