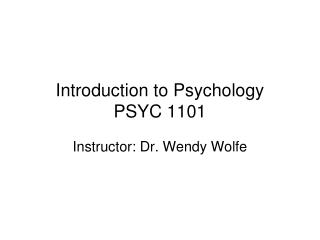 Introduction to Psychology PSYC 1101. Instructor: Dr. Wendy Wolfe. Psychology. Psychology: the study of behavior and mental processes and how they are affected by an organism’s physical state, mental state, and environment. Have you ever wondered….?. Happiness and Positive Psychology - . dr. phil watkins. i. an introduction to positive psychology. a) the importance

Structuralism in Psychology - . founders of structuralism. wilhelm wundt considered the “father of psychology”

Teaching the History of Christian Psychology: Looking at the past, pointing to the future - . philip g. monroe, psyd

Contemporary Psychology - . the lack of history…. regarding the homage (or lack thereof) to 19 th century psychology