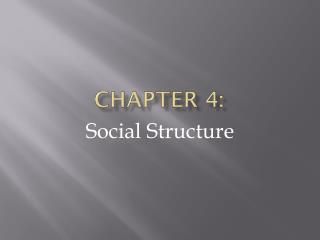 Chapter 4:. Social Structure. Section 2: Types of Social Interaction. Exchange Happens whenever an interaction between people occurs Reciprocity Getting something in return when you give something Leads to the “Exchange Theory”

Chapter 4 - . sampling. probability sampling. sampling methods that allow us to know in advance how likely it is that