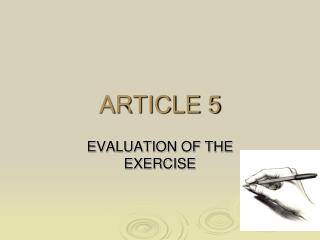 ARTICLE I - (original and proposed amendments) by-laws of the philippine navy savings and loan association, inc.

Please READ the article “The Five Keys”and fill out the Graphic Organizer while you wait to begin. - Please read the

A/A* English Language Paper 1: Writing to Persuade – Lesson 1 - . starter: what techniques can you use in your writing

Power’s of Congress - . mr. raymond. limited government. - article one how congress will work -congress is given

ADVISE SUSPECT OF ARTICLE 31 - MIRANDA RIGHTS - . action. identify the procedures used to:. advise a suspect of their

ARTICLE VII Executive Department - . section 1. the executive power shall be vested in the president of the philippines.

Congress - . article i, section 8. expressed (formal) powers are granted to congress in the direct language of the

Article 1: - . all human beings are born free and equal in dignity and rights. they should act towards one another in a

Article 2, Section 1 - The executive power shall be vested in a president of the united states of america. he shall hold