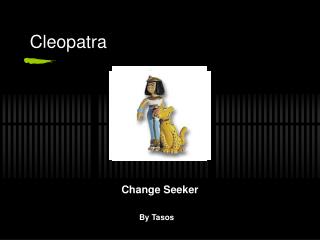 Cleopatra. Change Seeker. By Tasos. Biography. Birth: In 69BC, Cleopatra was born in Alexandria, Egypt. Married in 51BC. When Cleopatra was 18 she married her brother, Ptolemy. It was only a formality. CLEOPATRA - . ptolomy xii . became queen of egypt at the age of 17 joint ruler of egypt with her brother ptolomy xii

Cleopatra - . by ava arehart , 3 rd g rade. cleopatra is awesome. cleopatra was the daughter of pharaoh ptolemy. she

Cleopatra - . the brave egyptian queen. who was

Cleopatra - . by diya hyde park. contents page. who was cleopatra? how did cleopatra meet her first love? how did

CLEOPATRA - . the queen of egypt. cleopatra’s decisions. used alliances not wars. she always put her country/people

Cleopatra - Draw a t-shirt with a title, slogan and picture that romans could wear to express the events &amp;

Cleopatra - . by chesney lund. facts. cleopatra’s full name is cleopatra vii thea philopator. she was the daughter of

Cleopatra - . queen of egypt. basic facts . ruled from 51 bc – 30 bc life was filled with drama she was macedonian (not

Cleopatra VII - . by: cicely batie pd. 7. childhood. her father ptolemy xii was pharaoh of egypt, but caused many

Cleopatra VII - . by amanda. cleopatra’s early y ears…. cleopatra was born in 69 b.c. in alexandria, egypt. when she

Antony and Cleopatra - . act 2. accusation and defence. caesar. antony who does he blame?. agrippa’s solution. reasons

Antony and Cleopatra - . third lecture: the epistemology of cleo. the fourth dimension?. with enobarbus’ “death by