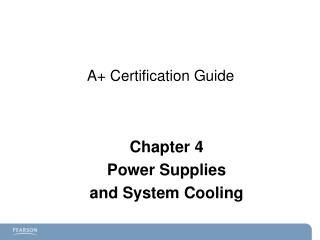 A+ Certification Guide. Chapter 4 Power Supplies and System Cooling. Chapter 5 Objectives. Power Supplies: Describe the device that transforms AC power from the wall outlet into DC power that your computer can use. A a Alligator , Alligator a-a-a - . (open mouth and clap hands together like alligator jaws). b b bouncing ball ,