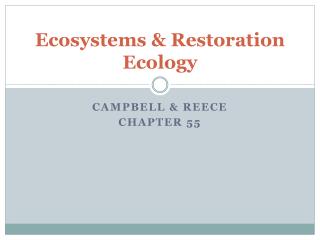 Ecology 1: Ecosystems - . levels of organization. organism ex. an elephant population a group of individuals in the same

Introduction to Ecology - . ecology. ecology is …… the study of interactions between living (biotic) and non-living

Chapter 13: Restoration Ecology - . 13.1 helping nature heal . rule #1: stop the abuse many systems heal on their own.

Landscape and Restoration Ecology - . chapter 5 apes. putting it all together. nature in balance. human disturbance. we

ECOLOGY AND HUMAN IMPACT ON ECOSYSTEMS - . mrs. woytowich regents biology. objectives upon completion of this unit