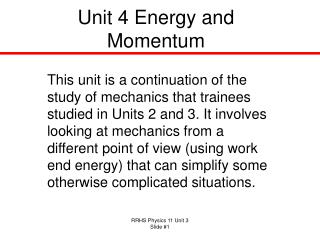 Unit 4 Energy and Momentum. This unit is a continuation of the study of mechanics that trainees studied in Units 2 and 3. It involves looking at mechanics from a different point of view (using work end energy) that can simplify some otherwise complicated situations.

Unit 4: Conservation of Energy - . this is the halfway point! chapters 1- 6 covered kinematics and dynamics of both

Chapter 13 KINETICS OF PARTICLES: ENERGY AND MOMENTUM METHODS - . consider a force f acting on a particle a . the work of

Momentum and Impulse - . momentum : a measure of how difficult it is to stop a moving object. momentum = mass x velocity

Unit 3 Physics Energy - . energy. the ability to do work… measured in joules (j). law of conservation of energy. energy

Unit IV: Work, Energy, and Momentum - . essential questions:  what is work?  how is work related to energy? 

Unit 5 Notes - . momentum. p=mv. in the last unit, we learned about conservation of energy. in this unit, we see

Unit 5 part 1 Linear Momentum - . units of momentum. momentum and its relation to force conservation of momentum

Unit IV: Work, Energy, and Momentum - . essential questions:  what is work?  how is work related to energy? 

Momentum and Impulse Review - . the velocity of a moving mass is called? ans : momentum force applied in a period of time