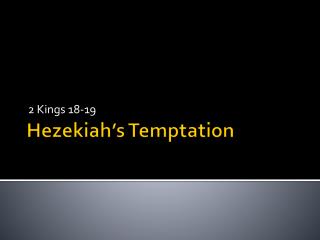 Finish reading “Sir Gawain” and answer the following: - . gawain, through facing his weaknesses and finally admitting

Hezekiah - . 2 kings 18:5 5 he trusted in the lord god of israel; so that after him was none like him among all the kings

GENESIS - . part five book of beginnings god as creator man made in god’s image eden temptationsin the fall and

The Four Mountains Of Moses - . many mountains mentioned in scripture. number of significant events tied to mountains.

THE DAY OF THE LORD (ZEPHANIAH) - . lesson 9 for june 1, 2013. the prophet zephaniah was great-great-grandson of king

Lecture Othello the Moor of Venice - . critical focus on act 3, most particularly the temptation scene. iago at end of

Abuse in the Church - Counseling leaders, caring for the congregation. abuse in the church. philip g. monroe, psyd

Questions for Federalist #10 - According to madison, what is the most common and durable source of factions? according to