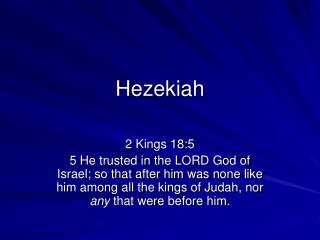 Hezekiah. 2 Kings 18:5 5 He trusted in the LORD God of Israel; so that after him was none like him among all the kings of Judah, nor any that were before him. Opening. Handout Events taken from three books Informal Group Exercises Ask Questions. Background - Family. 714 – 686 B.C. King Hezekiah - 2 chronicles 31:21 “and in every work that he began in the service of the house of god in the law and

Hezekiah the Reformer - . hezekiah. scholars are confused about his age and then length of his reign (2 kings 18:1-2)

Imparting Faith Hezekiah - . background. ahaz is hezekiah’s father he did evil in the sight of the lord he set up many

A Christlike mindset: Hezekiah or Tychicus? - . colossians 4:2-9. review from colossians 3 (set your hearts on things

Hezekiah Prays for Guidance and Follows Isaiah’s Counsel - . ” he removed the high places, and brake the images, and