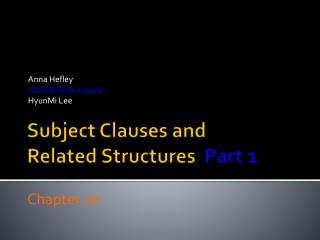 Clauses and Sentence Structures - . (not the santa type…ha!). what is a clause?. a clause is a group of words that

Clauses and Phrases Part 2 - . sentence structure lesson. part 2. what is an independent clause? what is a subordinate

1. Sentences and clauses - . starting assumption. the following presentation assumes that you have a basic idea about

The Integument and Related Structures - . learning objectives. list the cell types that make up the epidermis and