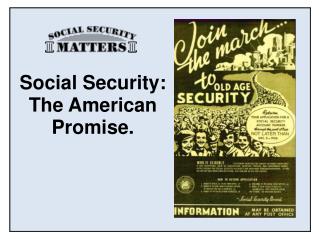 Social Security: The American Promise. How Does Social Security Work?. Workers contribute 6.2% of pay up to a maximum of $106,800 in earnings. Employers match this contribution, for a total of 12.4%. Today’s contributions cover today’s benefits – basically a pay-as-you-go system. The Social Security Number Crisis - . latanya sweeney. privacy.cs.cmu.edu. questions addressed in this lecture. how are

FELICITY CONDITIONS - - is i promise i'll tell mom if you hit me" a promise?explain your answer!(it appears to be a

Social Determinants of Health: - . lifetime consequences of maltreatment; children as the key to lifespan health; brain

Chapter 3: The Promise Is Fulfilled in Christ - . the mystery of redemption. 1. the announcement of jesus’ incarnation.

The Promise is Fulfilled - . the announcement of jesus’ incarnation. the annunciation. read luke 1.26-38 questions in

Conquering the Achievement Gap: The Promise of African American Males - . a summit sponsored by the michigan department

Governance of the Belgian Social Security (Brussel,12/05/2011) - . a. governance principles of the belgian social