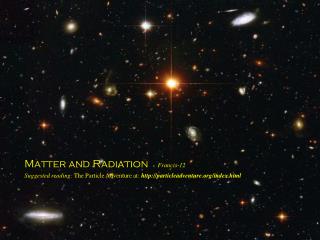 Matter and Radiation - Francis-12 Suggested reading: The Particle Adventure at: http://particleadventure.org/index.html. Matter and Radiation. localized point sources of mass. waves in a continuous potential field. We interrogate matter with radiation.

THE SUN - Lecture 6. the sun. this set of slides was compiled by prof. jeff forbes of the aerospace engineering

Applied NWP - . how do we “shoehorn” the filtered governing equations into the computer weather forecast model?