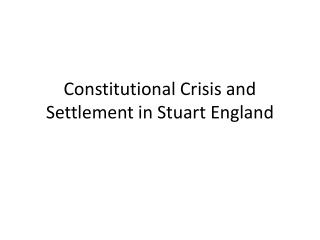 Constitutional Crisis and Settlement in Stuart England. James I (1603-1625). James I – Son of Mary Queen of Scots Was an outsider Inherited large debt and divided church Advocated absolutism

The Early Stuarts Mary Stuart - . early life. mary, queen of scots born in the 8th of december, 1542 the daughter of king

Chapter 14 Section 2 Social Crises, War, and Revolution - . learning objectives the students will be able to:. list the

Constitutionalism in England 1603-1689 - . tudors. war of roses—aristocracy fought over who would control the monarchy

Chapter 7, Section 1 Europe in Crisis: The Wars of Religion - * by 1560, calvinism &amp; catholicism had become

Aim: How did absolutism lead to a constitutional monarchy in England? - . do now: why do these things make it more

England Divided - . parliament and the monarchy fight for power 1485-1688. objective. swbat understand how the english

The British Monarchy - . monarchy of the united kingdom. there have been 12 monarchs of great britain and the united

English philology - . england. what do we know? write down anything you think you might know about this country.