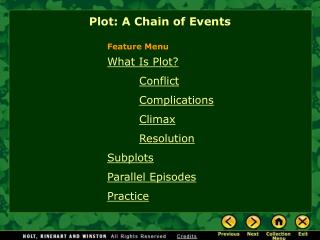 Plot: A Chain of Events. Feature Menu. What Is Plot? Conflict Complications Climax Resolution Subplots Parallel Episodes Practice. What Is Plot?. A story needs more than interesting characters to make you want to read it. Rick just wants people to like him—especially Jen. Jen Inside stories - . short stories unit grade 12. plot. plot: the storyline or organization of incidents within a story.

Elements of Plot - . plot is the sequence of related events in a story. . literary analysis: plot. exposition conflict

William Shakespeare The Merchant of Venice ANALYSIS - . plot and subplots. the main plot : the bond between antonio and

The Landlady page 61 - . by raold dahl. 3.2 evaluate the structural elements of the plot (e.g., subplots, parallel

Elements of Fiction: Plot and Setting - . plot. the series of events in the narrative. plot consists of exposition,