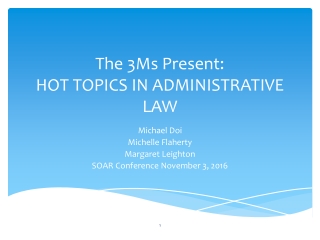 The 3Ms Present: HOT TOPICS IN ADMINISTRATIVE LAW. Michael Doi Michelle Flaherty Margaret Leighton SOAR Conference November 3, 2016. The Standard of Review Smackdown. Why do we care about the standard of review?. avoid being (successfully) judicially reviewed/appealed