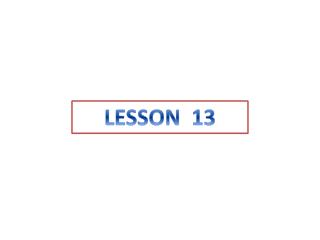 LESSON 13. Overview of Previous Lesson(s). Over View. An NFA accepts a string if the symbols of the string specify a path from the start to an accepting state. These symbols may specify several paths, some of which lead to accepting state s and some that don't. Lesson 13 - . called to serve doctrine and covenants 4. “no man can serve two masters; for either he will hate the one,

Lesson 13 - . purple power plus. implicate. to involve or connect unfavorably. analgesic. a medication to reduce or

Lesson # 13 - . the respiratory system 2. chapter 23. objectives:. 1 - to explain the physical principles governing the

Lesson 13 - . 姜海英. supermaket. grocery shop. hairdresser. flat. near. next to. across the road. on the right of. on

Lesson 13 - . tola , jair , jephthah. tola. tola, the son of puah from issachar lived in shamir in the hill country of