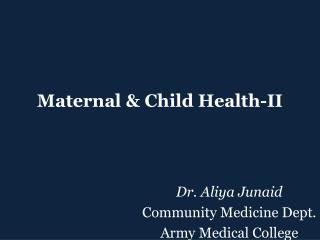 IPHS FOR PHC - . iphs genesis. nrhm aims:- to reduce child and maternal deaths, to stabilize population and to ensure

Transitioning from Year 11 to Year 12 - . what needs to be considered?. your child’s pathway(s)/interests. your

OBSTETRIC EMERGENCIES - Overview:. obstetric emergencies - cause damage and death to mothers and babies. they require

U.S. Public Health Service Perinatal Guidelines - . recommendations for the use of antiretroviral drugs in pregnant hiv-1

Maternal and Child Health - . learning objectives. by the end of this session, participants will be able to: explain the

Who is a child? - . a child is every human being below the age of 18 years unless, national laws recognize the age of

Quality in Child Care and How to Measure it - . the environment rating scales training for child care health consultants