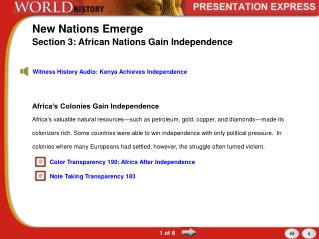 Chapter 4 American Life in the 17 th Century - . the unhealthy chesapeake. the settlements near the chesapeake (jamestown

V.D.Savarkar and The Indian War of Independence, 1857 - . today’s music: talvin singh, “sway of verses” from ha

The Road to Revolution: (1763-1776) - . less colonial dependence on britain colonials have less respect for british

Economics of the Industrial Revolution - . how to make a living in the 1800s. looking to get a bigger piece of the pie.

Chapter 1 New World Beginnings - . i. peopling the americas. a. bering land bridge 1. as the ice age was ending and the

FRENCH REVOLUTION AND THE NAPOLEONIC ERA, 1789-1815 - . naisbitt/freiler. eighteenth-century revolutions. in the second