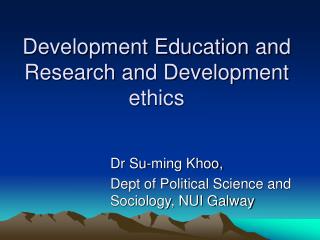 Ethics Education: Considerations for Development and Evaluation - . presented at : university of illinois - champaign may

Development of Information Society and the Role of Education, Research and Culture - . tina vuga cent re for egovernance

Healthcare Consortium - . how do we expand on this opportunity?. 5 strategic objectives. industry sector development

Ethics in Research - . qualitative research methods. ethics in research. why important? with ethics there is often no

Research and Development - . to develop and establish the ‘would like to meet’ proposal that emerged from last

Research Ethics - . summary. but what has ethics got to do with research?. is “pure” research above ethics and

Education, Fertility, and Development - . we have seen that education is, in most countries related to fertility decline

The Center for ETHICS* - . the effect of competition and educational moral reasoning methodologies on competitive